Performance Max campaigns, what is it and what should you do with it?

What is a Performance Max campaign?

Performance Max is a new campaign format introduced by Google. It’s a campaign format that takes Google’s automation to a new level and uses more machine learning than we’ve been used to until now.

A Performance Max campaign allows the advertiser to advertise on multiple channels with a single campaign. This was not possible before and you had to create multiple campaigns for this. In that respect, this new form of advertising is groundbreaking and is a major step in the automation of Google.

Performance Max campaigns are shown within the following channels:

This makes this the first campaign form within Google Ads that allows you to advertise on so many different channels with one campaign.

In addition to a number of settings that you must enter by default, such as budget and bidding strategy, Google asks for the following input for your Performance Max campaigns:

When you have submitted this, the campaign can be started. So it is not necessary to add keywords to your Performance Max campaign. Google itself determines when the relevant advertisements will be shown. 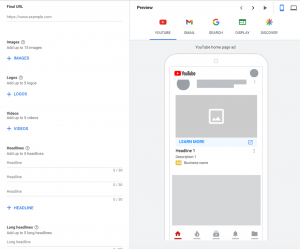 What insights do you get from the Performance Max campaign?

Once you’ve run the campaign, you don’t get many tools to make changes within your campaign. For example, you don’t see the search terms on which the campaign was shown, you don’t see which channels the campaign was shown through, performance of individual ad groups is not given and the budget breakdown per channel is unknown. What you can influence is the so-called quality of your ad. It is indicated to make as much use as possible of the available amount of headlines, descriptions, images and videos. As we also know from Display and Responsive Search Ads. The more you fill everything and vary the headlines and descriptions, the higher Google’s rating will be. However, this does not say anything about the performance of the advertisements.

When to use Performance Max campaign?

It sounds very natural to create such a campaign and then sit back. However, it is important to have a few things right. The campaign runs on machine learning and it is therefore important to be able to provide sufficient input (data) to Google’s algorithm. Historical data is key in this and largely determines the success of the campaign. When you have a lot of historical data, it is easier for the algorithm to target the right audience. Since you can only send in this during the campaign, it is important to get this right in advance.

By historical data I also mean that sufficient conversions must have been achieved in the past in order to achieve good results with the campaign. Google doesn’t know which audience to target and who has a greater chance of conversion if this is not the case. Google then, as it were, shoots with hail in the hope of having a direct hit, the chance of this is of course small. That’s why you need to give Google as clear a target as possible to shoot at.

So my advice here is, use Performance Max campaigns when you have a lot of historical data so that Google knows where to target. The chance of success with your campaign is then considerably greater. In addition, the Performance Max campaigns are not yet available in every account. You only have access to this campaign form when the new appearance of the conversion screen is in your account within Google Ads. This is being done in phases by Google, so that not every Ads account has access to it and cannot automatically run Performance Max on it.

Do you need help setting up your Performance Max campaigns? Please contact our SEA experts, they will be happy to help you on your way.

Looking for a website or application developer who can help you?

You are very welcome to meet with us for an informal conversation and a delicious cup of coffee. Call 050 – 553 23 34 or email us at hallo@convident.nl to make an appointment. Do you want to be called back? Of course that’s also possible.

© 2014 - 2022 Copyright - Convident Digital Agency. Convident B.V. is rated with a 4.8 / 5 based on 227 reviews. Partnerships Information Privacy statement Terms and conditions