Convident support Jop van der Laan. Jop is a very enthusiastic and fanatical athlete who wants to make his dream come true! He is a professional wheelchair rugby player for the Dutch team and wants to break through at the highest level. Convident has helped Jop with his (online) expressions, from logo and color scheme to managing his own website. 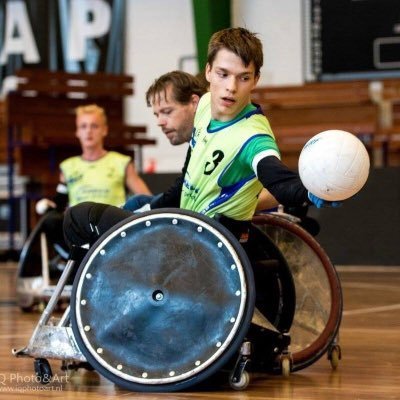 Convident supports top athlete Jop van der Laan. Jop is a very enthusiastic and fanatic athlete who wants to make his dreams come true! He is a professional wheelchair rugby player for the Dutch team and wants to break through to the highest level. Convident helped Jop with his (online) presence by creating a logo, choosing a colour scheme and managing his website.

“A website with which I can recruit new sponsors, how cool”

To Achieve Something with a Top Sport

Since birth, Jop has had a physical limitation in the form of Cerebral Palsy (CP). This means that he has increased, and sometimes uncontrolled, muscle tension, in his case especially in his legs and right arm. He also has impaired hearing. But that doesn’t stop him from exercising at an exceptionally high level! “Real tremendous drive and great perseverance. A very special project on all fronts. Because in addition to our support in terms of website and communications, Jop is a real source of inspiration for many top athletes ”, says Rick Dreise of Convident.

4 years ago it became clear that Jop has sports talent and became a regular player for the national wheelchair rugby team! “We are now preparing for the qualifying tournament for promotion from Division C to Division B,” said Jop van der Laan. Wheelchair rugby is not yet part of the NOC/NSF organization. This means that Jop and his family have to pay the travel and accommodation costs for foreign tournaments and training in the Netherlands, themselves. Equipment (eg. rugby wheelchair and gloves) is also at his own expense.

NOC/NSF status is to be expected upon promotion to Division A. Jop is constantly looking for sponsors who will help him realize his dream.

How can we be of service to you?

The Friends of the Brain Institute Foundation – Brain friend

The Friends of the Brain Institute Foundation – Brain friend
Social

Looking for a website or application developer who can help you?

You are very welcome to meet with us for an informal conversation and a delicious cup of coffee. Call 050 – 553 23 34 or email us at hallo@convident.nl to make an appointment. Do you want to be called back? Of course that’s also possible.

© 2014 - 2022 Copyright - Convident Digital Agency. Convident B.V. is rated with a 4.8 / 5 based on 227 reviews. Partnerships Information Privacy statement Terms and conditions